“There’s something primal in the satisfaction of making. It connects to that part of us that yearns to be self-sufficient and also to the creative within us. Looking at a finished object that you’ve created is amazing.” 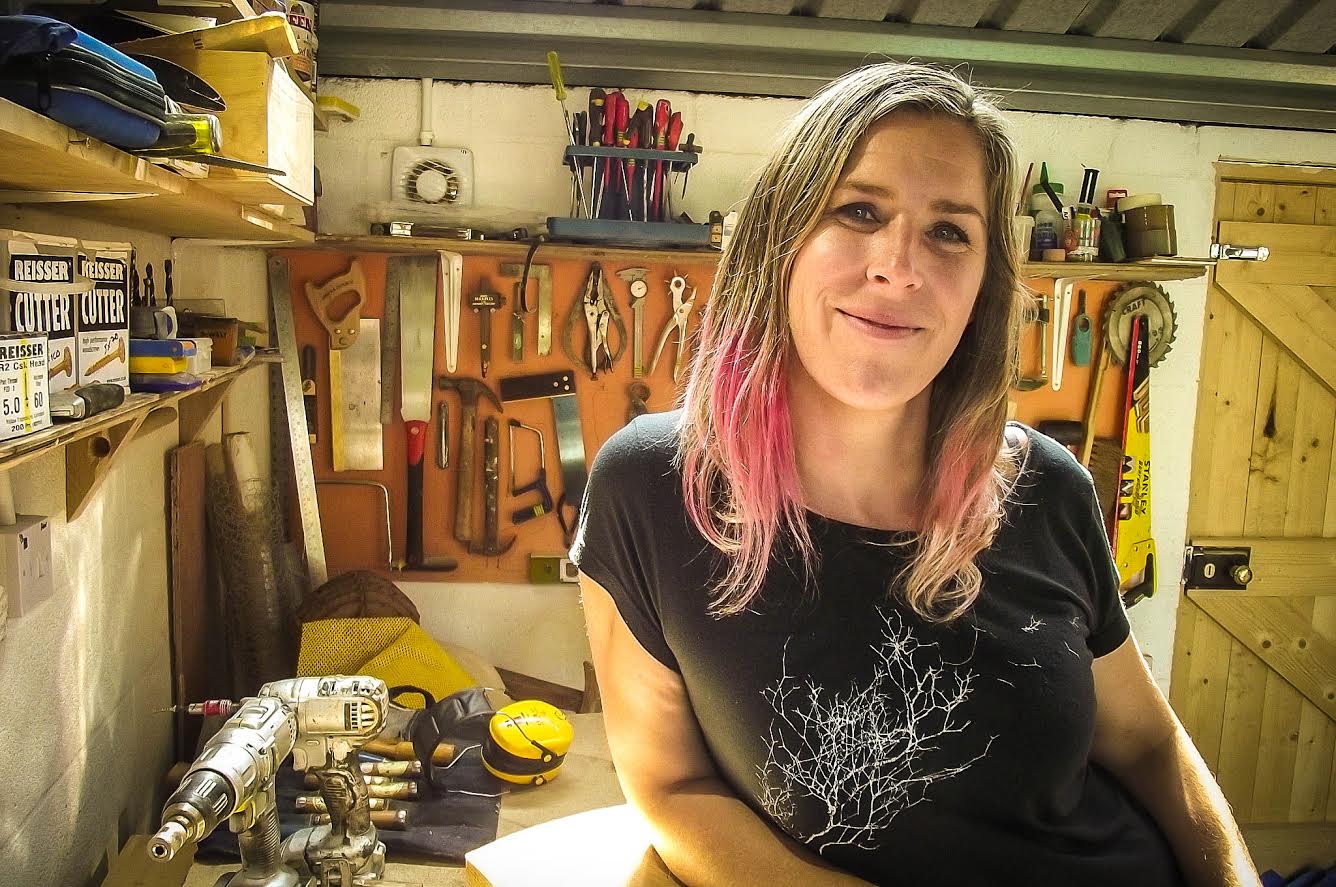 Entering 5th year in school I was pretty unsure about the future. I had a really good think about what I had enjoyed so far and settled on a class called CDT (craft, design, technology).

Making stuff, fixing things and art and craft, were things I loved. I thought about furniture making and liked the idea of producing objects that would last, be useful, beautiful and loved.

For me, step one was dropping out of school halfway through 6th year. Thankfully, my supportive mother, a university lecturer, saw kids studying courses for the sake of it all the time. She wasn’t hell bent on me going to college if not the right choice. My teachers, of course, thought that I was ruining my life!

As it was a practical skill, I thought it best to learn through an apprenticeship. I contacted furniture makers around Dublin and did work experience with a few of them. This gave me good insight into what kind of shop I might want to apprentice in. The choice of where to apprentice is important. You are relying on one person to teach you and will be working solely on their designs.

The equivalent of the craft council at the time had a database of Irish furniture makers.

Luckily my top choice within that database, ‘Michael Bell Design‘, was looking for someone. We got on well and I started immediately. Working there confirmed my love for making, and my confidence in becoming a craftsperson. Unfortunately, I had to leave after 6 months due to a combination of a non-job-related back injury and the isolation of living in the middle of nowhere, aged 17.

I moved to Scotland and did other jobs for a time, always being creative and making in some form or other. At 22 I gave it another go and found The Woodschool, a makers collective attached to a woodland trust in the Scottish Borders.

They weren’t in a position to take on an apprentice, but six diverse makers to learn from was too good an opportunity to miss!

I volunteered there full time, with some expenses covered. They had an amazing set up of a sawmill, kilns, all the native hardwoods, fully kitted-out machine shop, spray room and finishing room. I machined for them, made small batch products for the trust, helped with commissions, and did a few of my own.

The makers were generously taught me a lot, but because I was learning in a non-linear way, after 9 months, I decided to go to college as well. I became a mature student on the Higher National Diploma in Furniture Production and Design at Adam Smith College in Kirkcaldy in Fife. For the first year, I split my week between Fife and work at The Woodschool.

I learned that extreme patience and diligence is required to make high-end furniture by hand. I was certainly surprised about the cost of production. Aside from machines, tools and wood; it’s the consumables and hardware which mounts up. The glue, the screws, the fixings etc. Design time is also difficult to include in the quote. The guys I worked under were selling beautiful pieces for a good price, but working 70 hour weeks on around the minimum wage. Generally, there is a lot more money in jobs like bespoke kitchens and shop fit-outs. An exception to this is selling pieces at high prices to private collectors.

Being a maker has given me the confidence to look after myself in a very practical way.

I like that I can tackle a wide variety of problems, even if I don’t have expertise in that area. I’ll see if I can fix it before calling someone else. My favourite thing about making is the power in shaping something in your vision. There’s something primal in the satisfaction of making. It connects to that part of us that yearns to be self-sufficient and also to the creative within us. Looking at a finished object that you’ve created is amazing. 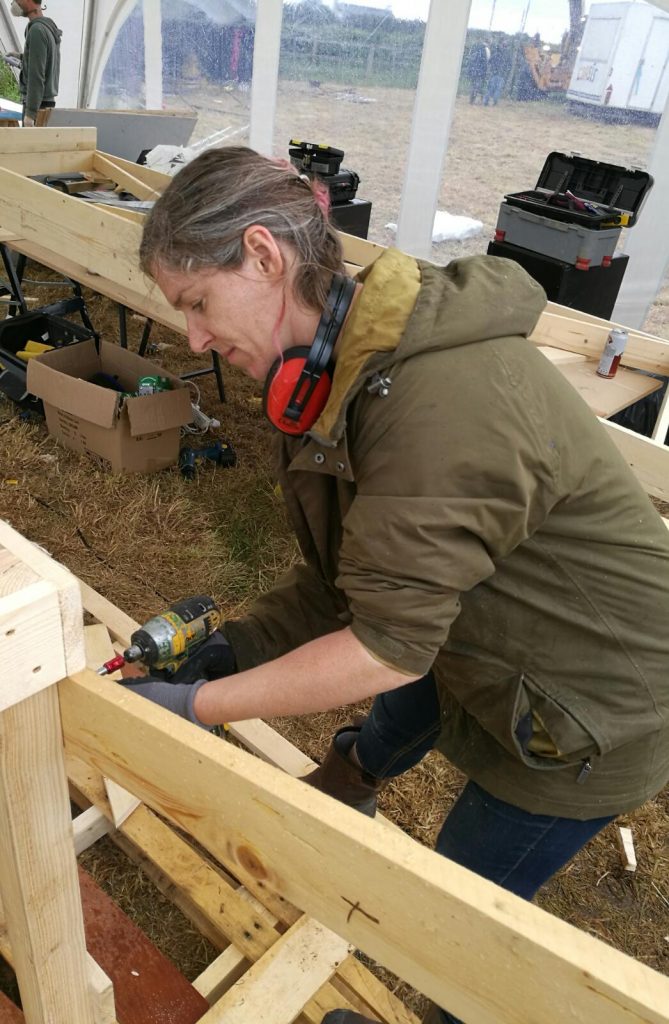 I’m still on the road to fully supporting myself as a maker. I work part-time in the food markets and am in the early stages of becoming self-employed. I am charging much closer to my desired amount now and that’s satisfying.

It is harder for women entering a trade. In training, women are more likely to ask questions to understand what they’re doing, especially in operating machines. This can be taken as a lack of confidence, which in a machismo environment people can react to with a lack of trust. It was quite frustrating, especially as I didn’t injure myself or cause damage to machines when young men around me were. You just laugh though and carry on because it’s nonsense. There are all sorts of issues until you gain the respect and confidence of the men you are working with. You do get used to it and you get better at making that happen more quickly. Once you do, there really is no difference.

There has never been any situation where I was unable to help get a job done because I was a woman.

Yes, the top level of a man’s strength will often exceed that of a woman of the same size, but there isn’t call for that level of strength very often in modern society. Our workplaces are designed differently. Machines and gadgets do the heavy lifting for us these days. In general, I have always been treated with respect by my male colleagues.

I still have dilemmas with aspects of the gender issue now. For instance, chosing a trading name for myself. Do I include my first name, essentially highlighting that I’m female? Do I just use my surname knowing the assumption will be that I’m male? The following story illustrates my dilemma; Recently a client was shopping at a suppliers where I am known. He mentioned that I was doing a job for him to a man who works there, who I have enjoyed chats with in the past. The man was genuinely surprised and said “really? You would employ a woman?” and the client replied, “yes, I would especially employ the woman because I know some others wouldn’t.”

I was shocked by both sides of the exchange. I knew that I faced some discrimination. It genuinely hadn’t occurred to me that someone wouldn’t give me a contract at all just because I was female.

During the recession, I worked in the food markets full time and I went back to college to do business admin. In the last few years, I have slowly started making again. First on other people’s projects and then more of my own. Now I do carpentry as well as furniture making, commissions and restorations.

The environment for women entering the trades has become better.

It still needs to change a lot, but it’s becoming less of a big deal. I’m noticing I don’t get talked down to so much by people in builders merchants or tool suppliers. And there’s the growing range of well researched and developed women’s workwear.

Get as much practical experience as you can.

I now have a first class honours in Digital Design and Fabrication from the FabLab in Limerick. The next industrial revolution is happening. I want to be a part of that.

It’s exciting times for the manufacturing industry. I want to combine my hand craft skills and knowledge with the technology available. In fact, I think it’s difficult to compete in the market place now if you don’t use technology where applicable. With automation of manufacturing , there is a real danger of traditional practical trades knowledge being lost. Understanding construction methods, material behaviours and aesthetics from a traditional background will have advantages in the future where the majority will not have such in depth understanding.

I’ve built a bespoke kitchen in oak, market stall fit outs, business signage and display cabinets. During the summers, I do festival builds of music venues.

We use wooden posts, hazel poles and slab wood. I also make a range of wooden chopping boards and serving platters from sustainably sourced native hardwoods. I have worked on a 300 capacity, oak and ash event-sized yurt. An oak and larch shepherd’s hut built onto original Victorian steels. I have taken my skills to refugee camps in Calais, converting an outbuilding into a food store as well as building communal spaces for the residents of the Dunkirk camp. 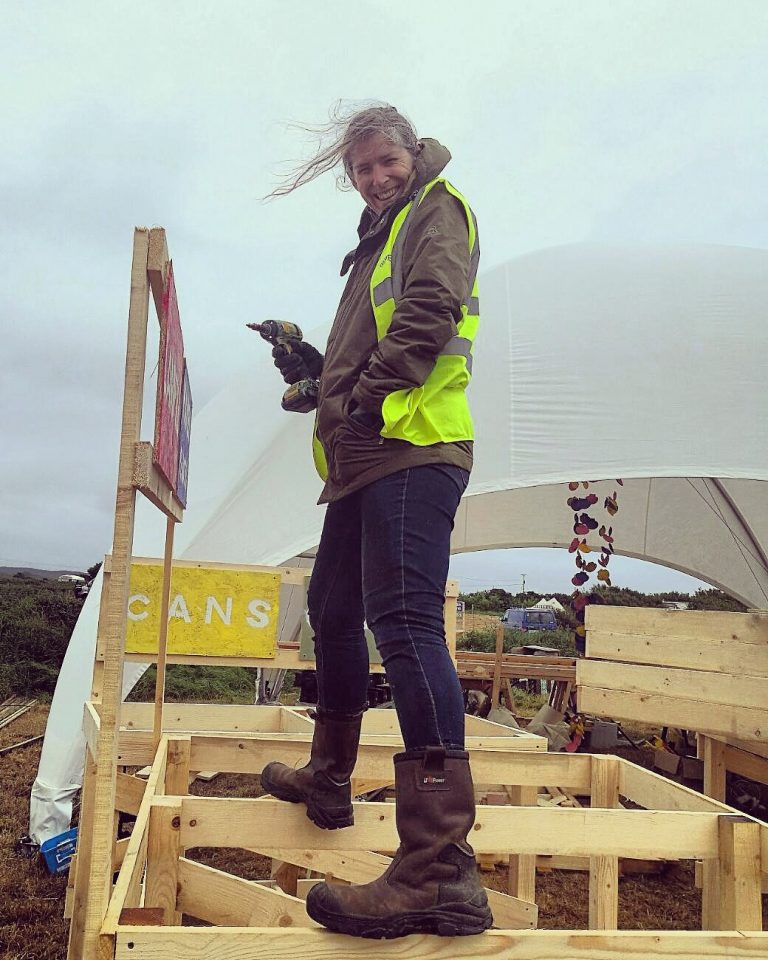 I also have done builds for spectacles and trade fairs with the Russian cardboard artists Cardboardia. Together with my partner Paul, we have built a mobile sculpture for the alternative St. Patricks Day parade at the Mart Gallery in Rathmines. Next week I’ll be at a festival as a site carpenter and following this, I have a number of commissions for built-in domestic furniture.

The next thing I would like to work on are small products I can produce in my workshop over the Winter months to sell both online and locally.

One goal is to do more high-end domestic items. I like the contrast between being away from home doing really big fast builds where the workflow is organic, with only a rough guide to work from and on another occasion, doing very detailed work in the workshop at home achieve a highly polished result. 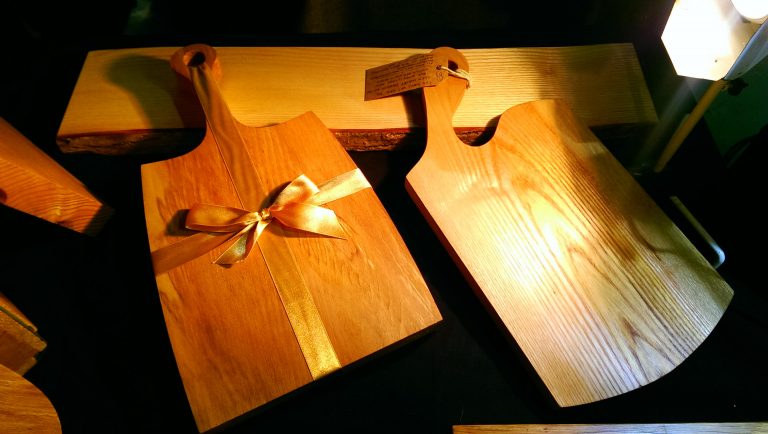