“I am proud of the purpose in what I do for a living. It is important work and it’s important to do it right – all the time. I also really like working in an environment where it doesn’t matter at all what you look like or what kind of ‘odd’ you are, because it’s what you actually do that matters”

My name is Kate Meleady, and I come originally from the Northside of Dublin. I am an Aircraft Engineer, specifically an Avionic Licenced Engineer/Inspector. What it means is that I am responsible for the electrical, instrument, radio and radar systems on the aircraft, and their maintenance, repair and modifications.

It took 4 years to complete the FÁS standards based apprenticeship in Dublin with Team AerLingus/FLS Aerospace. In 2003 I left Ireland and went contracting abroad.
I was never much of a dolly or dress-up kind of kid. I was always working with my hands, crafting odds and ends, hoarding loads of ‘might be useful’ stuff, and following my Dad around as he taught himself DIY.

For my third Christmas on earth, I was given my first toolbox (Fisher-Price toolbox/workbench combo). (A photo that year captured my look of disgust, being interrupted as I dismantled the fireplace-priceless!)

My first electronic set showed up when I was eight, and by eleven I was giving woodwork a serious go. An opportunity to do work experience in Transition Year really gave me the kick into my future career. I did two weeks in a small helicopter company and that was it, I was hooked. Not particularly on aircraft mind you, but rather on the challenge of repairing a machine in order to keep people safe, using my bare hands (and lots and lots of tools!). I was accepted in to the Aviation apprenticeship three years later. This was after a brief foray into academic engineering where I got bored finding that there would be little, if any, practical/hands-on aspects to the degree.

I am proud of the purpose in what I do for a living. It is important work and it’s important to do it right – all the time. I also really like working in an environment where it doesn’t matter at all what you look like or what kind of ‘odd’ you are, because it’s what you actually do that matters.

In my first few months contracting in Europe, aged 23, I had an accident and fell down some stairs and broke my neck. It wasn’t clear at first how serious it was and I continued working for 3 weeks as it steadily worsened. At any point if I had hit my head or slipped I would not had survived. Doctors in Sweden repaired me. Now ‘my neck bone’s connected to my hip bone’ (technically a Cyborg apparently). Since then every day is a bonus. Though life’s full of troughs and crests, I always remember to smell the roses and enjoy the view.

I undertook a project a few years ago in French speaking West Africa. In the beginning we were two native English speakers, then we were three, and then I was alone. It was an extremely challenging project. It had difficult circumstances, challenging people, and on an aircraft model I had never seen before.

The initial position I held, was as an electrician or wireman. I was installing a modification on the aircraft, with no responsibility other than routing and installing wiring and hardware. Within the first week, out of necessity, I had stepped in to run the project. I was overseeing everything, installing and testing the modification, repairing the aircraft, coordinating between the manufacturer and the military responsible for the aircraft (as it turned out it was the Presidents favourite aircraft).

The project was intense, with logistical challenges. There were new friends, a lack of tools and parts, great food, design errors, dancing and great music. On top of that was man-power issues, tragedy, stress, loneliness, sickness, laughter and more dancing, threats, stress, success, a rescue, a sad yet relieved goodbye. It’s a crazy story. And compounded by the fact, that it was I running the project; a woman with dreadlocks and tattoos, on a military base in West Africa. Nonetheless by the end, I was able to leave in one piece. And it provided a great deal of satisfaction being responsible for the aircraft being repaired, and returning it to service. It was an intense project that I am very proud of, and yet grateful it’s over.

Aircraft engineers, mechanics, sheet metal workers and avionic technicians are the unsung heroes of aviation. We’re the people who keep you safe every time you travel on an aircraft. Every action undertaken by a pilot is only possible because we have ensured the correct operation of the systems.

Every time we sign off an aircraft we are responsible for up to a million people travelling on the machine over two years… that’s a lot of responsibility in an industry which doesn’t really financially remunerate those dedicated to safety. The role is taken very seriously, and aircraft engineers are conscientiously committed to producing an airworthy aircraft. So much so, that our signature goes beside every task we complete, thereby holding us personally responsible.

To qualify for the AML ( Aircraft Mechanic Licence) requires the same investment of time as does an upper level academic qualification. Its a combination of 4 years of maintenance experience where all your tasks are verified by an inspector, and a series of exams in which you must achieve at least 75%.

For example, the company that I work for, Atlantic Aviation, has produced several gold medals in recent years at the World Skills Competition.

When I finally get away from a work contract, I really want to make the most of my free time and take the chance to reconnect with friends and family, to have adventures and fun with my wonderful husband, who is a massage therapist. We travel, we eat – he cooks. We’re creative and nerdy, and very, very silly. Last year, after travelling extensively for work over 14 years, my husband and I have returned to Ireland and I hope to keep my feet on the ground for a while.

I’m quite bonkers and energetic and very definitely a’ glass half full’ kind of person. I tend to trust in the universe, and so far it’s worked out very well for me. 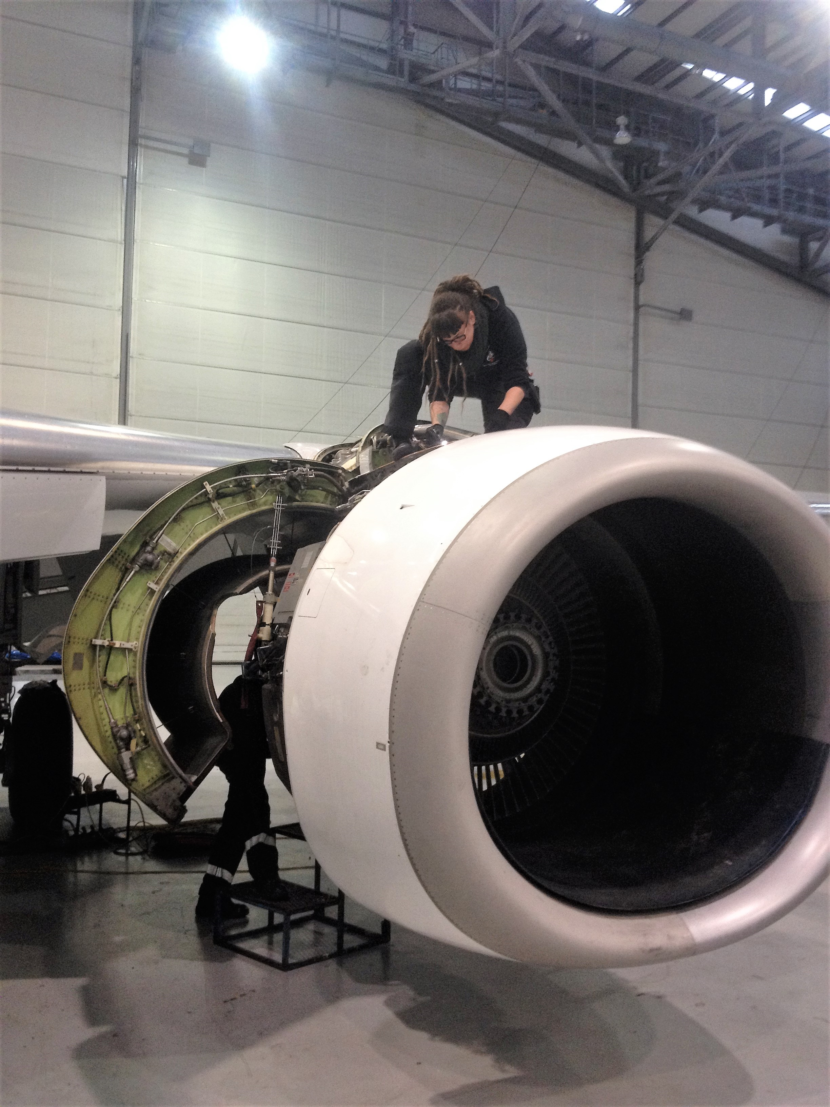